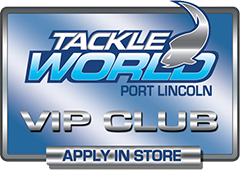 The weather has certainly changed and summer fish will soon drop right off. Tuna, Blue Crabs and Yellowfin Whiting have dropped off but can still be caught in a few areas. Flathead, King George Whiting, Squid, Salmon and Gummy Sharks are cool water fish that are really firing up and these will be good targets as winter approaches.

Here’s what has been biting in the last week.

There is more and more Salmon reports from beaches in the area and further west as well, no real big ones just yet with most fish around the 2-3kg mark with just about all beaches having Salmon to some degree. Some beaches are also good for big Tommies and Mullet and the occasional Flathead which are generally real good ones.

Other news has been of big Squid from the jetties between Elliston and Ceduna and the Shimano Flash Boost jigs are reported to be a standout in the last week. These jigs have a small mirror in the jig which flashes when moved attracting the Squid. There’s also some big Garfish from the same jetties, with a little bit of berley you can get a good feed.

Flathead again have been reported in good numbers and many have been picked up by Whiting fishers and also those using lures and soft plastics. There’s also Whiting, Salmon Trout, Tommies, some really good sized Garfish and some good sized Gummy Sharks in-between all the Eagle Rays.

Both boat and land-based fishers have been getting amongst it all. Farm Beach is pretty good for Whiting of mixed size anywhere from under sized to 40cm can be caught depending on where you fish but most grounds do have legal Whiting to some degree. There’s some big squid, plenty of good sized Garfish and Flathead again getting caught on Whiting lines.

For those after something bigger Gummy Sharks are in good numbers and with a bit of berley it’s not that hard get one with a bit of patience. Offshore news is much quieter this week due to the weather not presenting to many opportunities but you will still find some Tuna, Samsons and Kingfish around the islands and bottom fishers will find some good Nannygai and School Sharks.

Salmon news has come once again from Gunyah Beach and there are some better reports from Convention Beach this week where some good schools of Salmon have been in close.

Land based Whiting reports are quite good with a few Whiting being caught from the jetties and there should some from Axel Stenross. The best reports are from North Shore, Murrays Point, Tulka and in National Park, late in the day is best with a good high tide, you don’t need a boat and you can easily get a quota from the rocks if you fish right on dark when the Whiting bite hardest. Squid from the same areas are good and there’ s been real big ones caught.

Flathead to from the North Shore and National Park this week have had the best reports and once again some big ones have been in the mix. Daiwa Bait Junkies and Jackson Bone Baits are stand out soft plastics for Flathead and they have even been a few big Whiting caught on them to.

Boat fishers for Whiting are going pretty well in bays and the Whiting are fairly spread right out along with Squid and also Garfish which also are big and in good numbers. Further down the coast if you want to go that far Taylors and Thistle Island are good for big Whiting, Squid, Garfish and Snook as well.

Offshore Like Coffin Bay there’s been very few reports mostly due to the weather but if the weekend comes good like the weather reports suggest, there should be Tuna, Samson’s and Kingfish from the Cabbage Patch and most other areas will have Nannygai, Blue Morwong and Sharks.

Salmon fishers are finding Salmon to be hit and miss this week along the Sleaford coast but with a bit of stormy weather this week this could improve fishing for the weekend.

The jetty holds good numbers of Squid, Garfish and Snook, at night Tommies are in good numbers. Flathead are going well of the beaches around Tumby and big ones have been reported, the same soft plastics as every else are the standouts for big Flathead. There a few Yellowfin Whiting around off some of those beaches but can be hard work, lures which are working are the Daiwa Slippery Dogs, Jackson EBI Panics and Sugar Pens.

Boat fishing news is much the same as last week, you don’t need to head right out as in close is good for big Garfish, Whiting, Snook, Tommies and some big Squid, south of Tumby sounds pretty good.

The Group is good if you want to head there and Whiting fishing should improve quite a bit by the end of the month. There is all the usuals out there still like Snook, Squid, Garfish, Tommies and even a few Gummy Sharks.

Boat reports are mostly from the Arno to Cowell region where there have been some nice Whiting and big Squid. Port Neill should be pretty good for big Garfish and plenty of them and some good numbers of Squid.

This weeks photos are courtesy of:

Jake McLeod: Gummy Shark caught at Coffin Bay which was tagged and released.

The rain we will hopefully be getting at the end of the week will stir things up and hopefully get the Flathead, Squid and Whiting fired up!